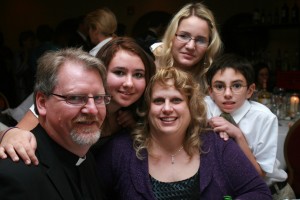 Pastor Mark Schimmel has been the shepherd here at Zion since September of 2013.  He and his wife Carmen and their three children Melody, Ashley, and Louis moved here to Priddy after accepting the call from Zion after having spent over 5 years as the pastor at New Life Lutheran Church in Myrtle Beach, SC.

Pastor Mark is a “second career” pastor; he spent 22 years as an engineer developing and producing new products for a major filtration manufacturer in Connecticut. During that time he was a very active member of an ELCA mission congregation – serving as a church musician, technical director, adult Sunday school teacher, church council member and officer, as well as doing any other little thing that might have needed doing around a church!

Several members of that congregation got together and decided to form a new congregation, choosing to affiliate with Lutheran Congregations in Mission for Christ (LCMC). The new congregation (being very small and unable to pay for a pastor) chose Mark to be their pastor.

Pastor Mark accepted this call and began looking at what he needed to do to bolster his education to do this “job” of being a pastor. He found a new organization that was just in the process of starting up in the LCMC called the Beyond the River Academy (BTRA). BTRA was the idea of a group of rural pastors in the Midwest who had an idea to train pastors for rural ministry to serve small congregations that could not afford a seminary educated, MDiv pastor. The idea made sense for more than the rural situations that the founders of BTRA were thinking about when they came up with the idea. It was a model that could simply train pastors to serve in any situation where there is a small congregation that cannot afford a traditionally educated pastor.

Pastor Mark was among the first class of graduates from BTRA in the fall of 2010. He then submitted his application to be listed on the LCMC certified clergy list and following a certification interview with a group of LCMC pastors, was added to that list.

Mark served as the part-time pastor of that LCMC mission congregation in Connecticut for about two years until he was one of many who were caught in the economic downturn toward the end of 2007 when he was laid off and unable to find employment in the engineering field.

Several LCMC clergy friends encouraged Mark to apply for open positions on the LCMC website. This led to an interview and two road trips to Myrtle Beach to meet with the people at New Life Lutheran church, and the rest is history.

Pastor Mark’s undergraduate degree is a BSc in Chemistry-Biology from Keene State College of the University System of New Hampshire.

Pastor Mark enjoys some typical hobbies of engineer types – working on and using mechanical and electrical things like cars and computers, as well as some outdoor activities like archery, shooting sports, and hunting.